[NOTE: I was putting this article together in a hurry yesterday, and completely forgot to include an embedded video of Reggie performing live that I ran across on YouTube. You’ll find it about halfway down. My apologies! –Al 11-13-11 @ 11:55am]

Reggie Houston is a New Orleans native who took up the saxophone at age 10 and played his first professional gig two years later. Following three years in the military during the Vietnam War, he enrolled in the first university jazz program in the United States, at Southern University in Baton Rouge, Louisiana.

For a number of years after graduation, he was associated with the fledgling New Orleans Jazz And Heritage Festival. While working for the festival, he continued to gig with Irma Thomas, Bobby McFerrin and Charmaine Neville.

He then joined Fats Domino’s band, forming an association that lasted for 22 years. He then rejoined the soon-to-become world famous Charmaine Neville as the leader of her band. He kept that position until 2004, at which time he moved to Portland, Oregon. All I can say about that is, Louisiana’s loss was Portland’s gain.

Other world-class musicians he has worked with include Etta James, Amasa Miller, Doctor John, Maria Muldaur, Peter Gabriel, Professor Longhair, Bo Diddley, Buffy Sainte-Marie, and The Neville Family, among others.

For all his years of musical experience, Reggie Houston has been notably absent from the recording studio, at least as far as making recordings to be released under his own name. Therefore I feel lucky to count no less than three of his albums in my own personal collection: “Makin’ Groceries” (2004); “Reggie Houston’s Earth Island Band: Live At The Candlelight 9-23-2005 (a 3-disk extravaganza); and his first album, “The Gazebo Sessions” (1992). 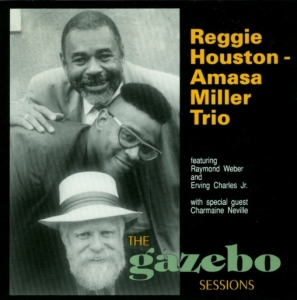 “The Gazebo Sessions” was recorded with the Amasa Miller Trio and features a guest appearance by Charmaine Neville. This album is the subject of this article, and is notable for several reasons. First, even though it has more gospel entries than I’d prefer, it is the only one of Reggie’s albums I’ve heard that is mostly jazz from start to finish. Don’t get me wrong. “Makin’ Groceries” and “Live At The Candlelight” contain their fair share of jazz, but they have a mix of other styles as well. In that regard, they are perhaps more indicative of the breadth of experience each of the musicians brings with them. But this blog is mainly about jazz, so lets get on with it.

“The Gazebo Sessions” is so named because it was recorded live at The Gazebo Café in New Orleans’ French Quarter, before a small but obviously appreciative audience. Track one is an outstanding version of the Sonny Rollins classic, “St. Thomas”. Following a beginning that includes drums, a cowbell and what sounds for all the world like a child’s whistle to set the pace, Reggie’s tenor sax takes the lead and keeps it throughout. Which is not to say the others don’t get their turn front and center, but we are never in doubt as to who is in charge.

On “Hello Josephine”, Reggie trades the sax at first for his own voice. We could argue all night the merits of his vocal skills. Let it suffice to say that he carries it off pretty darn well. I do not mean that to be damning with faint praise, either. Reggie’s singing voice has a rough, rugged texture to it that lends a lot more emotion than any pure, smooth soprano ever will.

Reggie sings again on several of the remaining tracks, including “Blueberry Hill” and “Hit The Road Jack”, where he is joined for a little vocal repartee by Charmaine Neville. “Wonderful World”, intentionally or not, comes across as a pretty fair imitation of Satchmo.

Finally, I have to mention “Down By The Riverside”. Of all the songs on this album, “Down By The Riverside” is absolutely the one I played most often on “Saturday Night Jazz”. As an atheist, you might imagine that I have little use for gospel music, and for the most part that would be a correct assumption. For example, album producer Mark Bingham could have left off tracks two and three (“Just A Closer Walk With Thee” and “Just A Little While To Stay Here”). Not because the performances are in any way faulty; they are not. But because these songs exist only to perpetuate religious belief.

Gospel music has obviously been a big part of Reggie’s life, because it unfortunately dominates his recorded works. But they’re his albums, and I wouldn’t presume to tell him not to include something he clearly enjoys. That doesn’t mean I need to like it, however. The gospel part, that is.

“Down By The Riverside” is different. Religionists may claim it as their own, but the fact is this song carries a broader, longer-lasting message to humanity as an anti-war anthem. In that light, its popularity will, I’m afraid, continue on into the future, long after the last superstitious believer of religion has turned to dust.

Of course, if there were no religion, the motivation behind most of the wars in human history would be gone, so perhaps the song won’t last after all.

At any rate, Reggie and his compatriots do a bang-up job on this song that functions equally well as just plain good music. Believers and non-believers alike will each, of course, find their own special messages in it, and be pleased.

For myself, I’ll just be pleased if you’ll go to Reggie’s web site and buy an album. Or better yet, buy an album AND tickets to the upcoming fundraiser to benefit Reggie. He’s currently recovering from cancer surgery, and I’m sure he can use the money.

Here is a video of Reggie, with my friend Tom D’Antoni:

And here is a link to a whole lot of videos of Reggie on YouTube.

You can learn more about Reggie Houston and his music by going to his web site and/or his Facebook page.

My original content, including photos other than album covers, Copyright © 2011 & 2015 by Al Evans. All rights reserved.

2 thoughts on “Jazz For A Saturday Night #14: Reggie Houston”