Last week I promised to try to make this week’s album worth the wait. I do believe you’re going to love this one!

Drummer Frank Derrick grew up in Harvey, Illinois. He began playing the drums at age 10 and by nineteen he was playing professionally. Over the years he has worked with Benny Carter, Redd Foxx, Eubie Blake, John Pizzarelli, Eartha Kitt, The Pointer Sisters, Ken Peplowski, Donna Summers and others. He also was the drummer for “The David Letterman Show” when it was on NBC.

The album I’m going to talk about today is Derrick’s only CD under his own name so far, the delightful “The Beat Goes On,” which was released on the JazzedMedia label in 2008. “The Beat Goes On” is one of those albums that was created with Saturday nights in mind. It is, in fact, a tribute of sorts to some of the great drummers who have inspired him. 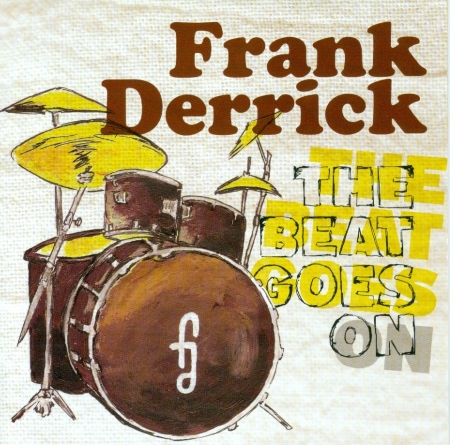 Frank Derrick “The Beat Goes On”

First, let’s have a look at the personnel. Two groups of musicians were involved in creating “The Beat Goes On”: A 16-member big band, and a quintet.

The big band members are:

And the quintet is composed of:

The album opens, appropriately enough, with “Away We Go”, a lively piece by Allyn Ferguson that lets everyone strut their stuff. In the 1960’s, Buddy Rich’s band performed this one as the theme of a TV program.

“Away We Go” is followed by “Conquest”, one of only two Derrick originals on the disk, and the first track by the quintet. According to Doug Ramsey’s liner notes, Derrick wrote “Conquest” with Art Blakey’s Jazz Messengers in mind. It is another animated number that moves right along. Caldwell (piano) and Ross (alto sax) are standouts on this one, as is trumpeter Mustafa.

Next we’re treated to a Neal Hefti composition called “Cute”. Mustafa’s trumpet opens it very lyrically before Ross’ flute takes charge of the middle of the tune. The flute is a beautiful instrument and Ross does an outstanding job before handing it back to Mustafa, who in turn passes the torch to Caldwell’s piano. It’s a great song, and everyone does a superb job on it.

I suppose I’m probably not the only one surprised to find a Sonny & Cher song on a jazz album. So I hopped over to YouTube and refreshed my memory as to how their version of “The Beat Goes On” sounded. I have to admit, it certainly brought back memories. I was a senior in high school the year “The Beat Goes On’ came out, and… But I digress. The story of that mis-spent summer doesn’t belong here. 😉

As arranged by Alan Baylock for the big band, Derrick’s “The Beat Goes On” is a completely different animal from Sonny & Cher’s original. It’s livelier, for one thing, and at just over seven minutes it is about twice as long as the original. The time flies, and so does the song, thanks in large part to trumpeter Haas. From a pop classic to a jazz standard, the transition is a thing to behold.

“Caravan” is hard to describe. The title conjures up an image of a long line of camels plodding along mile after mile of dry sand dunes, burning hot in the equatorial sun. The music itself is hot but absolutely not dry!

The longest song on the disk is a twelve minute medley from the Lerner & Lowe classic, “My Fair Lady”. They are presented here by the big band in a Mike Lewis arrangement that will leave you, well, jazzed.

Another classic, on an album of classics, is Brubeck’s “Blue Rondo A La Turk”. Derrick arranged this one himself and the result is a wonderful take on this great song from one of America’s musical treasures. Some may argue that Caldwell is no Brubeck, but then, who is? He does a superb job here, simply superb, as does the whole group.

Harking back to the 1970’s, “In Stride” is the second Derrick composition we have here. He describes it as “quasi-funk”, and it does have a funky sort of feel to it in places. (Some more than others!) Mostly I’d liken it to a wild ride through a well-kept but unfamiliar neighborhood. You don’t know where you’re going to wind up, but you sure enjoy the ride.

The final song I’m going to write about is the Richard Rodgers number, “Slaughter On 10th Avenue”. This version was arranged by Derrick, and features wonderfully lyrical solos by several of the guys. It begins slow and builds to a white hot burn, then the pace falls off as the group hands it over to Blair’s piano. Then we’re off and running again with the whole big band doing their thing. This is a great song, and it provides an appropriate closing to a fantastic album.

Frank Derrick’s “The Beat Goes On” is one of my personal favorite jazz albums. Between August of 2008 and June of 2010, I played tracks from this album 22 times on the air. Were I still on the air today, I’d still be playing tracks from it.

Because of this, I feel quite confident in predicting that you will find “The Beat Goes On” a great addition to your own personal playlist for a Saturday, or any other, night!

To learn more about Frank Derrick and his music, or to buy his CD, visit his web site here.

My original content, including photos other than album covers, Copyright © 2012 by Al Evans. All rights reserved.