After unexpectedly having to skip out on last week’s review, I wanted to make this week’s something special for you. I have listened to several CD’s since last weekend, looking listening for one that would be special enough to make up for last week.

I hope you like the one I settled on. 🙂

Ben Webster was born in Kansas City, Missouri on March 27, 1909. As a boy he learned to play both the violin and the piano. Eventually, Budd Johnson showed him how to play the saxophone and from then on the sax was his instrument of choice. 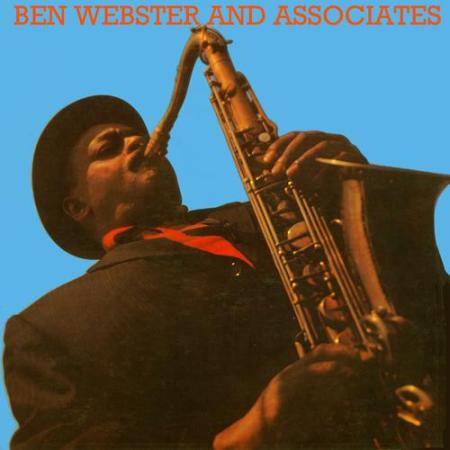 The album I’m going to discuss this time ’round, “Ben Webster And Associates”, was released in 1959 on the Verve label and includes several of the biggest names in jazz at the time.

This is a short album by 21st century standards, consisting of five songs that run just a little over 44 minutes. But boy, what an outstanding 44 minutes it is!

The first song, Duke Ellington and Milt Gabler’s 1940 classic, “In A Mellow Tone”, runs a bit over 20 minutes all by itself. The jazz record buyer in 1959 who bought this album and took it home would have been shocked and delighted to see that one song took up the whole first side of the record.

This rendition of “In A Mellow Tone” is outstanding, with all parties involved creating a mild, melodic masterpiece that burns its way through 20 minutes like it was nothing. Jimmy Jones on piano opens, and is soon joined by the horns and the rest of the group.

The first solo is Brown’s, and he plucks his way through his usual magnificent job, with Jones’ piano in the background. Then Jones steps forward again, if one can be said to step forward while playing a piano. He is backed by Brown and the other Jones, our drummer.

One by one they guys all get their turn in the limelight, and their efforts serve to make every minute of “In A Mellow Tone” truly a delight to the ear.

The Webster original “Dar-Dar” is up next. Brown and pianist Jones make the short head cook before the horns step in and fly away with it. The guys work their way through this up-beat, dynamic piece, and all 4 minutes and 40 seconds are as lively a bit of blues as you’re likely to ever hear. Simply magnificent!

The next song, “Young Bean”, is an obvious tribute to Webster’s colleague and idol. The Jones’ open on piano and drums, then the horns come roaring in for a brief encounter before Spann on guitar elbows them aside and shows us what nylon strings can do, followed by more from the saxes before trumpeter Eldridge comes up with some mighty blowing of his own. On and on it goes, for a bit over 6 minutes that will fly by so fast you’ll not believe it when it’s over.

“Time After Time” is by five seconds the shortest song on the album. When most people today hear the title they will probably think of either the 1984 Cydi Lauper song or the intriguing 1979 science fiction film starring Malcolm McDowell, both of which share the same name. The fact is, however, that Sammy Cahn and Jule Styne wrote the beautifully mellow ballad delightfully presented to us here way back in 1946.

Webster takes the whole song for himself, with mostly minimal backing from Jones on piano and Brown’s bass. This provides a wonderful contrast to the aggressive styling of “Young Bean”.

Here is a similar, if not identical, version of Ben Webster performing “Time After Time”. We are not told who the sidemen are, but I believe they are the same as on this album. This is, unfortunately, the only song from this album I was able to find online.

The final song, “Budd Johnson”, was of course intended as an homage to the other tenor sax player on this album, Webster’s longtime friend and sometime mentor. This is the second-longest song on the album, exceeded in length only by “In A Mellow Tone”. The liner notes describe “Budd Johnson” as “a slow blues with a simple unison line”. I describe it as having a warm, rich sound that leaves you relaxed and mellow.

As a parting gift, since I could find none of the other tracks here online, let’s take a listen to Ben Webster and Coleman Hawkins doing their rendition of “Blues For Yolanda” from 1957.

It will, I’m sure, come as no surprise to you when I say that “Ben Webster And Associates” will make a fantastic addition to your personal playlist, for a Saturday or any other night!

To learn more about Ben Webster and his music, visit the official Ben Webster Foundation web site. His music is available for purchase at all the usual places.

My original content, including photos other than album covers, Copyright © 2012 by Al Evans. All rights reserved.