Monty Alexander is one of the most distinguished, and sought-after, performers in jazz. There are not many other jazz musicians whose talent, popularity, and longevity come close to his. He was born in Kingston, Jamaica on D-Day, June 6, 1944. He took up the piano at an early age, and as a teenager was influenced by seeing Nat “King” Cole and Louis Armstrong perform live in Kingston.

In 1961 his family moved to the United States and he was soon playing piano professionally with Frank Sinatra, Bobby McFerrin, Bill Cosby, Quincy Jones, Clark Terry, Milt Jackson, Ray Brown, and many others. He has, to date, recorded more than 70 albums as a leader and countless others as a sideman.

Alexander never has strayed far mentally from his Jamaican roots, and his 2011 release, “Harlem Kingston Express: Live!” intermingled jazz and reggae and brought him his first Grammy award nomination. It was not his first blending of island music with straight-ahead jazz, however. In 1999, Telarc released his album “Stir It Up: The Music Of Bob Marley”. Alexander followed that up a year later with the subject of this week’s Jazz For A Saturday Night, “Monty Meets Sly And Robbie”.

The personnel for this one are: 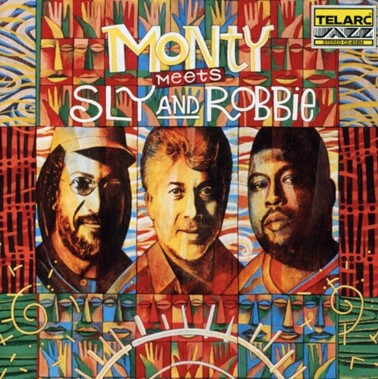 If you have never heard of Sly Dunbar and Robbie Shakespeare, join the club. Before this album fell into my hands, I hadn’t heard of them either. To say they are a “big deal” in the world of reggae music would be a gross understatement. Their story is too long and complicated for me to do it justice here, but that’s okay. Over on allmusic.com, Jo-Ann Greene has penned a comprehensive biography of this powerhouse duo’s rise to super-stardom. (Lest you think I’m guilty of hyperbole on that last comment, I’ll just point out that it isn’t everyone who can say they’ve toured as the opening act for The Rolling Stones. ‘Nuff said.)

“Monty Meets Sly And Robbie” wastes no time in letting you know you aren’t in Kansas any more, with the funky opening of the Herbie Hancock, Paul Jackson, Bennie Maupin, Harvey Mason classic, “Chameleon.” The funk actually never goes away, but guys soon settle into a nice groove that should appeal to all but the snootiest jazz purists. “Chameleon” is a great song and this group does an excellent job on it.

Another funky little riddim from Dunbar opens and drives the next track, Alexander’s composition “Monty’s Groove”. While possibly a bit disconcerting at first to those who have not previously had any exposure to reggae, Dunbar does grow on you and eventually you realize the song actually sounds pretty damn good this way. Despite the reggae stylings brought to the party by Dunbar and Shakespeare, Alexander’s work is essentially jazz, real jazz, a fact he firmly establishes with this song.

“Soulful Strut” is up next. Written by Eugene Record and Sonny Sanders, this is a nice, lively song that for the most part sounds like it has a touch of samba, if anything. Out of the first three songs on the album, “Soulful Strut” comes the closest to being a “typical” jazz piece, if there really is such a thing. It’s also probably the first song on the album that those snooty jazz purists will come close to liking, although “Monty’s Groove” certainly has the potential for that claim as well. However, the islands are never far from Alexander’s music and it shows in all the little ways that can drive the jazz purists nuts. (Don’t worry it’s a short trip. Heh.)

“The ‘In’ Crowd” gives us another funky opening with a weird little piece of business that you will soon find runs through the whole song. I’ve listened to this album every day for the past week, and this song still doesn’t appeal to me and that sound is the reason. I can only describe it as sounding like someone quickly running a vinyl LP forward and backward under the needle and it is, to my ears, extremely irritating. I know some so-called “party DJ’s” specialize in that sort of thing, but in my opinion they are substituting a gimmick for talent. The same applies to whatever is making that damn odd sound on “The ‘In’ Crowd.” Some people undoubtedly will like this song as-is, but I suspect they will like it despite the gimmick, not because of it. Removing it would improve the song 100%.

The Lee Morgan classic “Sidewinder” receives better treatment. In fact, this is the first song that the jazz purists out there should have no problem listening to. The group gives us a basic, straight-ahead jazz interpretation that anyone should love. Alexander’s piano skills are amply displayed, and Jankowski’s trumpet hits it just right.

“People Make The World Go Round” from Thom Bell and Linda Creed is up next. This is a quiet, unassuming song, driven forward by Dunbar’s drums and Shakespeare’s bass. The pace is relentless, and this could be the quietest dance song I’ve ever heard.

“People Make The World Go Round”:

I’m running way late with tonight, so I’m just going to discuss one more track before I upload this. Track seven is perhaps my favorite song on the whole album, and that is another of Alexander’s compositions, “(Do The) Kool Step.” Alexander opens it with a nice little piano riff and is soon joined by both Dunbar and Shakespeare in a jaunty, delightfully melodic piece that actually brought a smile to my face the first time I heard it. Besides the musicianship, someone (Alexander, perhaps? I don’t know) can be heard uttering grunts in the background, a La Erroll Garner. Shakespeare’s bass really stands out in this song, but everyone does an outstanding job.

Despite my misgivings about “The ‘In’ Crowd,” I have no doubt whatsoever that if you give it a chance, you will find Monty Alexander’s “Monty Meets Sly And Robbie” a superb addition to your personal playlist, for a Saturday or any other night!

To find out more about Monty Alexander and his music, visit his web site. To learn more about Sly and Robbie, see the link to the Jo-Ann Greene bio of them at the beginning of this article.

Your comments about this article and/or the subject are welcome! Please use the “Leave a Reply” area below. Rude, abusive comments and spam will be deleted.

Jazzforasaturdaynight.com contains only the jazz CD reviews I’ve written since May 2013. To see the complete index of all 73 reviews I wrote prior to that time, click here.
If you see an album that looks interesting, just click on the title and you will be taken to my review of that album on blogspot.com.