Pianist Gene Harris was arguably one of the most dynamic players in jazz. As I mentioned last week in my review of the Ray Brown Trio CD, anyone appearing on the same stage with Harris risked being relegated to being just along for the ride. Despite that he, like fellow dynamic pianist Dave Brubeck, was also capable of moving one almost to tears with the beautiful delicacy of a sweet ballad.

Gene Harris was born in Benton Harbor, Michigan on the first of September, 1933. He died of kidney disease at his home in Boise, Idaho on January 16, 2000. I have written about Harris previously on JFASN #63, so I won’t waste too much space here duplicating the information you can read there. He retired to Boise in the early 1980’s, only to be lured back to the music world by Ray Brown. His post-retirement musical output was prodigious, to say the least, and resulted in well over 20 albums just in that part of his career.

Including the album I’m here to tell you about this time. I have to say up front, this is one album that leaves me with mixed feelings. Not about Harris or his music, but about the fact that the album’s existence is owed to, of all things, a tobacco company: “Gene Harris & The Philip Morris All-Stars Live.” 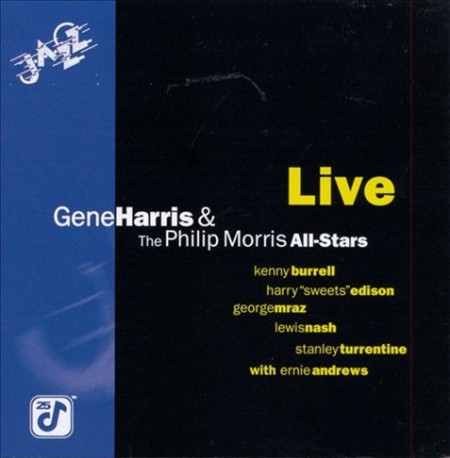 I haven’t done a whole lot of research into how it came about that Philip Morris sponsored a jazz band as recently as the late 1990’s. As an ex-smoker who will be celebrating 20 years of freedom from that nasty, filthy, disgusting habit tomorrow, I shudder every time I look at this album and the other Gene Harris albums they sponsored.

But we’re here about music, not the political propriety of getting in bed with a giant corporation desperate for any kind of positive PR it can buy. Safe to say, this sort of thing could not happen today without violating the FDA’s rules that prohibit tobacco companies from, among other things, sponsoring entertainment events.

So, having said that, let’s take a look at what we have here.

Since this album was recorded live, you know there won’t be much in the way of surprises, and that’s okay. The album consists of seven tracks, three of which are medleys of bluesy-jazzy standards, presented as only Gene Harris could.

Up first is Milt Jackson’s classic, “Bag’s Groove.” Mraz opens it, with his bass hitting the familiar first notes with quiet precision. He is soon joined by the rest of the guys, and barely a minute in, as Turrentine steps up, the audience claps in anticipation. The pace quickens and Turrentine and Harris both move the song along relentlessly. Then Burrell takes the lead and things get a little funky. Back to Harris, who is no stranger to funk, and the groove goes on, and on. The then-79 year old “Sweets” Edison steps up to take it out, and a grand exit it is.

“I Wish I Knew” is next, from the pens of Mack Gordon and Harry Warren. Mraz once again takes the opening and is joined seconds later by “Sweets.” At about a minute in Nash joins with his brushes and a bit of the ride cymbal and shortly after the rest of the gang joins in. The heat builds slowly and by four minutes in Harris has taken them ’round the bend, from ballad to bombast. Over it all, Mraz’s bass overpowers all, even when “Sweets” returns for his exit solo, the bass reverberates so low you can almost feel it.

An “Ellington Medley” is next, consisting of “Star Crossed Lovers” and, of course, “Take The A-Train.” The first song is pure Burrell, start to finish. Then about two and a half minutes in we hear the familiar opening notes of “Take The A-Train,” much to the audience’s delight. Burrell is still in charge, only now he’s joined by everyone except Harris, who finally is heard about four and a half minutes in. Harris is uncharacteristically restrained here, to the point where you could almost miss him entirely.

Stanley Turrentine opens “Time After Time” next and runs with it. The Sammy Cahn/Jules Styne standard never fails to please, and this version is no exception. The guys do a wonderful job with this one.

Next we are given another medley, this one four blues classics beginning with “All Blues” and continuing with “Every Day I Have The Blues,” “Goin’ Down Slow,” and “CC Rider.” Ernie Anderson provides the vocal component to a very lively set that kept the audience happy.

You can hear this great medley here:

The penultimate track is “Cottontail” from Duke Ellington. It opens with Nash beating his kit for all he’s worth, and things escalate from there. This is a fast-paced extravaganza of good old fashioned hard bop with the whole gang giving it their best shot. This one is Turrentine’s show for quite a while, and you get a real idea here of what a great talent he was. Which is not to say that everyone else gets a shot, because they do, and there is just one word to describe them all: Outstanding!

To hear for yourself how great this song is, well, you know the routine:

The exit piece is the third medley, dubbed “Low Down Blues Medley:” “Parker’s Mood,” “Goin’ To Chicago,” “Rocks In My Bed,” and “Confessin’ The Blues.” Once again we have Ernie Andrews doing to vocals.

If you love jazz and blues, then you will absolutely find that “Gene Harris & The Philip Morris All-Stars LIVE” will make a fantastic addition to your personal playlist, for a Saturday or any other night!

If you’d like to learn more about Gene Harris and his music, allaboutjazz.com has a short bio of him here.

While www.geneharris.org appears to no longer be active, there are other sites seeking attention for the annual Gene Harris Jazz Festival. If it is indeed going to happen this year, the festival will be in April.

With no representation on my part as to who may be the “official” site and who may not, I offer the following links found using Google, with the further caveat that you check thoroughly before sending money to anyone for tickets, lodging, etc.:

Oxford Suites is advertising room for the festival dates: http://www.oxfordsuitesboise.com/ep-gene-harris-jazz-festival-1281442564.php

Unlike a lot of the albums I write about here, this one is still and print and you can get yourself a copy direct from Concord.

Until next time, thanks for reading this. J

Your comments about this article and/or the subject are welcome! Please use the “Leave a Reply” box below. Rude, abusive comments and spam will be deleted.

I would like to once again discuss newer releases here, as well as older, classic jazz. If you represent a jazz artist with an album you feel would “fit in” here, whether new release or old, please contact me at saturdaynightjazz@yahoo.com. I will provide you with an address you can submit a review copy.

One thought on “Jazz For A Saturday Night #104: Gene Harris”