You don’t need me to tell you that these three gentlemen are some of the most talented musicians working in jazz. It was a great day for jazz lovers everywhere when they had the brilliant idea to get together and create an homage to one of the truly great legends of jazz, Charlie Parker.

First a little background on these three guys. Roy Hargrove was born on October 16, 1969 in Waco, Texas. He first took up the trumpet at age 10, and when he was in high school Wynton Marsalis heard Hargrove play and invited him to sit in with his band. After several other appearances with the Marsalis group, Hargrove secured other gigs with Dizzy Gillespie, Freddie Hubbard, and others. 2002 saw Hargrove, Herbie Hancock and Michael Brecker release an album called “Directions In Music” which received the GRAMMY for Best Instrumental Jazz Album, Individual or Group.

Bassist Christian McBride was born in Philadelphia, Pennsylvania on May 31, 1972. (And a happy upcoming 42nd birthday to him!) According to Feather and Gitler, writing in The Biographical Encyclopedia Of Jazz, McBride’s first professional gig was with Lovett Hines when he was only 13 years old. McBride studied at Julliard for a year before leaving to join sax player Bobby Watson’s group. Over the years he has played with a virtual who’s who of jazz greats, including J.J. Johnson, Sonny Rollins, Herbie Hancock, Milt Jackson, and many, many others.

Pianist Stephen Scott, born in Queens, New York on March 13, 1969 is possibly the least well-known member of the group. Nonetheless, this talented musician first began studying piano at age five, and attended private lessons at the aforementioned Julliard when he was only 12. He has worked with Betty Carter, Wynton Marsalis, Bobby Hutcherson, Elvin Jones, and others.

One of the things all three have in common is a deep love and respect for the work of Charlie “Bird” Parker. So it is no surprise that in April of 1995 they got together and released an album containing a staggering 16 tracks, most of which were, of course, written by the late bop tenor master. The title is “Parker’s Mood.” 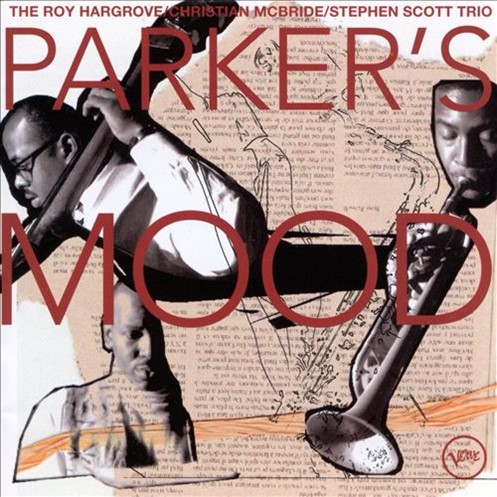 To review all 16 songs would be beyond the scope of this blog. However, I am going to hit most of the high points.

“Parker’s Mood” opens with one of the more oddly-named songs in the history of music, “Klactoveesedstene.” I will tell you right now that I never played any version of this song on Saturday Night Jazz because, frankly, I have no idea how on earth you pronounce the title! Be that as it may, the song is a classic of the hard bop era, and Hargrove, McBride and Scott more than do it justice. The piece has a lively opening that features all three, then it morphs into a series of solos

The title track, “Parker’s Mood,” is up next. This of course is another of Bird’s classic, timeless compositions. More of a ballad than the unpronounceable predecessor, “Parker’s Mood” is a wonderful late-night song best listened to with the lights turned low and the volume turned high. Hargrove opens, of course, followed by Scott, all the while McBride drives them along nicely. The tempo picks up momentarily during Scott’s solo, and you almost find yourself wishing it would stay that way. But then Hargrove once again steps up, and Mister Mellow returns. 😉

The next song I want to tell you about is track 6, “Dexterity.” This is a nice tune, and Hargrove’s choice to use a mute on his horn is a nice touch that has the effect of making the trumpet sound a bit like an alto sax. Mind you, I said “a bit.” “Dexterity” is a sprightly song, one of those that makes it hard to make your feet and hands stay still.

If you listen with a pair of good headphones*, you can just barely hear Scott doing some tantalizing vocalizations as he plays.

Neal Hefti’s “Repetition” is next. This one has a samba-like flavor at the start. It soon goes away, but not entirely. This is another one of those songs that, while mellow, makes you want to get up and dance around the room. As I’m writing this, I’m being a human bobble-head of sorts, back and forth side to side with the music.

Everyone knows “April In Paris,” right? It’s like “Take The ‘A’ Train” or the theme to “Doctor Who”: Once you’ve heard it you’ll never forget it. Well, my friends, I really wish this was available on YouTube, because Scott’s solo presented here is “April In Paris” like you’ve probably never heard it before. Gone is the big band blast from Count Basie and practically everyone else who has performed this song. Scott does pick up the pace for a moment toward the end, but this is basically a beautiful, beautiful ballad.

We are back to more or less familiar territory with “Bongo Beep,” which features the whole group. Each is one of the greats of our time at his chosen instrument, and this strangely-named song showcases their amazing talents perfectly.

I have barely scratched the surface of this wonderful album. “Parker’s Mood” has a lot to offer the musical explorer, and I’m sure you know that I am going to say it will make a superb addition to your personal playlist, for a Saturday or any other night!

If you’d like to learn more about Roy Hargrove and his music, check out Verve’s web site. They have an extensive write-up about him, as do the folks at JazzTrumpetSolos.com.

NPR has an artist page devoted to Christian McBride, and as you would expect there is also a nice bio of him on his own web site.

Stephen Scott maintains a low profile, apparently, but there is a short bio of him on the allmusic.com web site.

Thank you for reading this.

*For the time being, I am still using the inexpensive but robust Sennheiser HD 202’s that I used most of the 8 ½ years I was at KMHD.

Your comments about this article and/or the subject are welcome! Please use the “Leave a Reply” box below. Rude, abusive comments and spam will be deleted.

I would like to once again discuss newer releases here, as well as older, classic jazz. If you represent a jazz artist with an album you feel would “fit in” here, whether new release or old, please contact me at saturdaynightjazz@yahoo.com. I will provide you with an address you can submit a review copy.

My original content, including photos other than album covers, Copyright © 2014 by Al Evans. All rights reserved.

“In the end, only three things matter: how much you loved, how gently you lived, and how gracefully you let go of the things not meant for you.” ~ Buddhist saying