Richard Allen Mitchell, better known as “Blue”, was born in Miami, Florida on March 13, 1930 and died in Los Angeles on May 21, 1979. He could very well have become one of the best-known names in jazz had his career (and his life) not been cut short by cancer when he was only 49 years old.

He took up the trumpet in high school, then when he was in his early 20’s he began playing with Paul Williams. Eventually he moved on to play with Earl Bostic’s band, Red Prysock, Chuck Willis, and Sarah Vaughan.

In 1958, the year Mitchell recorded the album I’m going to tell you about, he also sat in on a gig with Cannonball Adderley, after which he signed up for a long-term run with Horace Silver’s famous quintet. When Silver dissolved that group, Mitchell formed his own first band consisting of several other Silver alumni.

Mitchell recorded several albums during his comparatively brief career. Depending on who you listen to, the album I want to tell you about this week is either his first or second as a leader.
Mitchell recorded this one in 1958 and he gave it the title, “Big 6.” 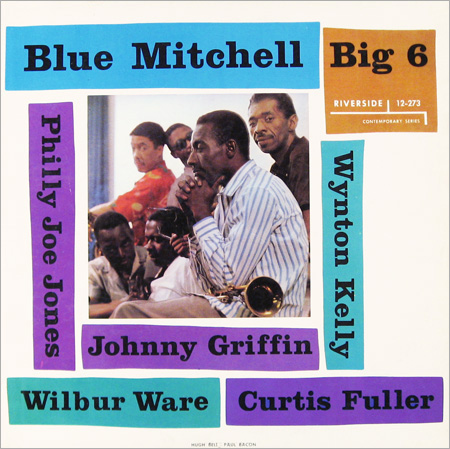 This is an “A” list recording, put together by six of the hottest names in jazz at the time. At 44 minutes, the running time is a bit short by modern standards, but “Big 6” more than makes up for that with the quality of the songs. There are no fillers, no duds, on this album.

“Big 6” opens with the earliest recording of Benny Golson’s “Blues March.” The song went on to become a classic, but I don’t think you’ll find a better version than the one right here. About a minute and a half in, Griffin takes the lead for a minute or so before being followed first by Mitchell and then Fuller. While all this is going on, the guys in the rhythm section lay down a cool bop groove that carries them all forward.

Check out “Blues March” for yourself:

Next we have the title track, “Big Six,” which was written by one William Boone. I was able to find no information to share with you about Boone. Feather & Gitler make no mention of him in “The Biographical Encyclopedia of Jazz,” and I could find nothing about him in my admittedly modest collection of books on jazz history.

Whoever the elusive Boone is (or, more likely, was), he did a bang-up job when he wrote “Big Six.” Everyone jumps in right from the start, and they all follow Ware’s bass line through to the end. Along the way we are once again treated to a great solo from Griffin. As in “Blues March,” Griffin is followed by Mitchell, and he is in turn supplanted first by Fuller, then Kelly, and then back to Mitchell. Somewhere in there we get a couple of short bursts from Jones. They are hardly long enough to be called solos, but then again they are also far too short to suffer from the tedium most drum solos engender.

Here are the guys performing “Big 6.” I’m not sure where they got the video…

The Mack Gordon/Harry Warren standard, “There Will Never Be Another You” makes a nice change of pace from the quick delivery of the opening songs. Mitchell’s horn brings a gentle beauty to this classic. Kelly gets a nice solo and carries it off well.

Next we have “Brother ‘Ball,” one of two Mitchell-penned entries we have on this album. In true bop form, “Brother ‘Ball” doesn’t waste any time getting to the action. Half a minute or so in Mitchell steps forward for an extended solo. Griffin follows.

If your only exposure to Griffin has been the “tenor battles” he participated in with Dexter Gordon and others, I think you’ll like this different view of him. Don’t get me wrong, I love a good encounter between two tenors as much as the next jazz lover. But here he is energetic without being as frenetic as he is when playing with Dex. Griffin is followed again by Fuller, and he is in turn followed by Kelly.

Curtis Fuller’s “JAMPH” is next. I have long puzzled the meaning, if any, of this title. Is it an acronym? I’ve no idea. Whatever the meaning is, the song itself is, of course, one of the best bop pieces ever recorded. The horns, led by Mitchell, of course, take the spotlight, while Ware’s bass again lays down a great line. He and Jones on the drums truly are the unsung heroes of this album.

For the final video, here is the enigmatically-named “JAMPH” for your listening pleasure:

It should be obvious by now that I truly believe that you will find “Big 6” from Blue Mitchell to be a wonderful addition to your personal playlist, for a Saturday or any other night.

If you would like to learn more about Blue Mitchell and his music, here are a few places to check out:

Concord Music Group has a short bio and information about several of Mitchell’s recordings.

Richard S. Ginell has written a nice but brief bio of Mitchell for the allmusic.com web site.

Wikipedia has a short bio and surprisingly extensive discography for Mitchell.

Last but not least, a gentleman named Pops Hanson published a nice piece about Mitchell on the 21st Century Brass web site in June of this year.

Your comments about this article and/or the subject are welcome! Please use the “Leave a Reply” box below.
Rude, abusive comments and spam (even those not-so-cleverly disguised as actual comments!) will be deleted.

My original content, including photos other than album covers, Copyright © 2014 by Al Evans. All rights reserved.

6 thoughts on “Jazz For A Saturday Night #118: Blue Mitchell”