Becoming a professional jazz violinist has never been what you would call the road to stardom. The list of well-known, successful jazz violinists has to be short.

With apologies to the others, Stephane Grappelli and Portland’s own Eddie Parente are the only two who come to mind at the moment.

Nonetheless, violinist Christian Howes chose that path, and while his name is hardly a household word, it would be hard to argue that he’s a failure.

Howes was born February 21, 1972 in Columbus, Ohio. He began playing violin when he was five years old, and appeared with the Columbus Symphony Orchestra when he was sixteen.

After high school he went to Ohio State University and studied to become a classical violinist. His studies (and, indeed, his whole life) were derailed at the age of nineteen when he was arrested and sentenced to up to six years in prison for drug abuse.

For a lot of young men, that arrest and conviction would have destroyed their lives. America has become a country that neither forgives nor forgets legal transgressions.

Everything from “sex offender” registries to the little box on job applications labeled “check here if you have ever been convicted of a crime” has been designed to ensure that law violators continue to be punished for years after their release, often for the rest of their lives.

There is, in 21st Century America, no more concept of having “paid your debt” to society.

With that in mind, it is even more amazing that after Howes was released from prison four years later, he was able to rebuild his life. He re-dedicated himself to his music and hasn’t looked back since.

While in prison, Howes became exposed to blues and gospel music, and as a result he changed his musical direction. After his release, rather than continue with his classical studies he switched to blues and jazz, often mixing the two with intriguing results.

He did return to Ohio State and earn his degree, but it was in philosophy, not classical music.

Howes has gone on to become a successful working musician, appearing with Greg Osby, Les Paul, Spyro Gyra, Steve Turre, Randy Brecker, and others. He is also an associate professor of music at the Berklee College of Music, and as if all that wasn’t enough, he also gives private lessons.

Beginning with the hard bop album “Confluence” released in 1997, just a year after his own release from prison, Howes now has a handful of albums as a leader under his belt.

The album I want to tell you about was released on the Resonance Records label in 2010 and is called “Out Of The Blue.” 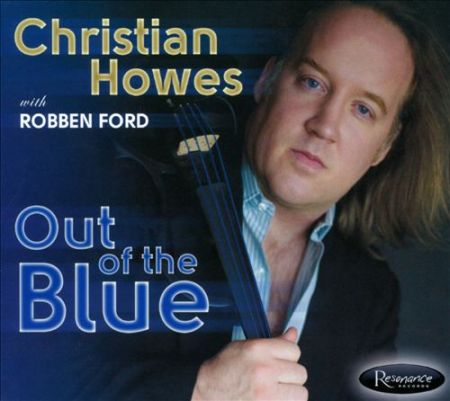 “Out Of The Blue” with Christian Howes & Robben Ford

The personnel for this album are:

“Out Of The Blue” gives us ten songs, of which three are Howes’ own compositions.

The album open with the Chick Corea song “Fingerprints”. I don’t believe I’ve ever heard the original, so I can’t compare Howes’ version to Corea’s. I can tell you that the version presented here is enjoyable without being predictable. Howes does a spectacular job with the lead until about three minutes in when pianist Hendelman takes over. Hendelman has been filling in the gaps, so to speak, all along, and his solo is magnificent. About four minutes in the spotlight falls on Axt for a while, and then Ford steps forward and gives us some wonderfully understated fretwork.

The Fats Domino tune “I’m Walkin'” is up next. As one would expect, this familiar number walks right in and grabs your attention from the git-go. Standout solos from Hendelman and Ford really make this one.

“Cape Verdean Blues” from Horace Silver opens quietly, sounding like it’s going to be a mellow change of pace. That misperception is quickly dispelled and we are treated to another animated refrain where all hands acquit themselves well.

With track four we find the first of Howes’ own compositions, the intriguingly titled “Gumbo Klomp”. The liner notes are silent as to the provenance of this song. I will say it is definitely unique and completely unpredictable, and the guys do a superb job on it.

Next we come to the title track, “Out Of The Blue.” Like “Cape Verdean Blues,” this one opens quietly, with just Howes and pianist Floyd, plus drummer Rosenblatt. At the two minute mark the tune changes dramatically, although it remains fairly mellow. I’ve wrestled with my personal feelings about this one, bouncing back and forth between feelings of admiration and “ugh.” Perhaps there is a bit too much fusion in this one for my tastes, I’m really not sure. You will have to give it a listen and make up your own mind.

I’m rapidly running out of time so I’m going to skip ahead to another of Howes’ pieces, “Bobby’s Bad.” This one definitely has a fusion voice, but unlike “Out Of The Blue” it doesn’t come off as discordant. I especially like Floyd’s contribution on the Hammond organ. His solo about two minutes in is a real high point.

“Sing Me Softly Of The Blues” was written by Carla Bley and originally released by Art Farmer. This is a classic blues piece that could have just as well been recorded by B.B. King or Buddy Guy. (And may have, for all I know.) If you like blues, you’ll love this one. If you don’t like blues, well, maybe it’s time you considered broadening your musical horizons a bit. J

All in all, I have to say that I am positive that you will find “Out Of The Blue” with Christian Howes and Robben Ford to be an outstanding addition to your personal playlist, for a Saturday or any other night!

If you’d like to find out more about Christian Howes and his music, a good place to start would be his web site.

More info about Robben Ford can be found here on his personal web site.

Howes’ record label, Resonance Records, has a nice page devoted to him where you can also purchase several of his albums.

Finally, Howes has a YouTube channel with an extensive list of “how-to” videos for the aspiring violin players.

It also includes the following documentary about his transformation from convicted drug offender to world-class musician and educator:

My original content, including photos other than album covers, Copyright © 2015 by Al Evans. All rights reserved.

NOTE: On 2-14-2015 some minor typos in this article were corrected and it was also added to the category “Drug abuse and jazz”. -AE