With apologies to the late Cedar Walton, today has been one of those days where just about nothing that I had planned went AS planned. As a result of that, it is now 20 minutes before 5 Pacific Time, and here I sit, having just thrown out the part of this review I wrote last week.

I am now beginning from scratch at what amounts to the last minute.

I guess that’s life, with or without sleep apnea.

Cedar Walton was one of the greatest jazz pianists ever to tickle the ivories. In a career that spanned the better part of six decades he recorded dozens of albums of his own, appeared as a sideman on scores of others, and played live shows who knows how many times.

Even though the word is sorely overused these days, Walton truly was a legend.

He was born January 17, 1934 in Dallas, Texas, and died August 19, 2013 in Brooklyn, New York. His mother, Ruth, who taught Walton how to play the piano at an early age, further encouraged his musical talent by taking him to live performances by various jazz luminaries of the era. During a brief stint in the army he had the opportunity to hone his skills alongside Dizzy Gillespie, Eddie Harris, and others who visited the troops and played for them.

Over the years, Walton performed with a long list of jazz greats, including Billy Higgins, Joshua Redman, Kenny Dorham, Abbey Lincoln, and, of course, Art Blakey, to name only a few.

The Cedar Walton album I want to tell you about was recorded on January 4, 1973, but was not released until some twenty-five years later on March 17, 1998. I am speaking of “Naima,” which was recorded live at a New York jazz club called Boomers. 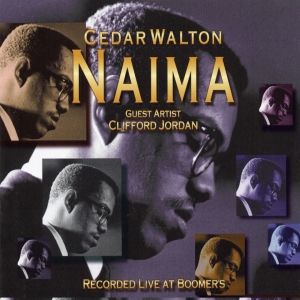 The personnel for this gig were:

“Naima” opens with one of the two Walton originals on this disk, “Holy Land.” I will leave it to those who profess to believe in religion to comment on the appropriateness (or the lack thereof) of playing a song with “Holy” in the title in a jazz club. Even in the 1970’s, most such clubs were hardly examples of the type of ambiance most religious believers wanted associated with their respective invisible friends. Not outwardly, anyway.

Regardless of that, and despite the unfortunate title, “Holy Land” is a terrific song. The whole group jumps in right at the first note, and even though the tempo and volume drop off almost immediately, things are soon cookin’ as the guys lay down a great groove.

The next song is one that I really, truly hated when it first came out, a fact made all the worse for me because I was (and still am, for that matter) a huge fan of its writers, But Bacharach and Hal David, and the guy for whom it was written, Herb Alpert. I am, of course, speaking of “This Guy’s In Love With You.”

The version we are presented with here is considerably different from Alpert’s version, which was recorded five years earlier. Alpert was a young, good-looking fellow with a huge following thanks to the success of a little band he had formed in the early 1960’s called The Tijuana Brass. Alpert’s version is a romantic vocal, and if you are into that sort of thing, click the “Alpert’s version” link above an knock your socks off. 🙂

Walton et al present us with a more serious piece of music that runs a bit over eight minutes. It has a mellow start that could be imagined as romantic by those who are so inclined. While it lacks the direct, emotional hook of Alpert’s vocal, Walton’s medium tempo speed is just right to carry things along, punctuated by Hayes light, sharp, rat-a-tat-tat on the Hi hat. The heat slowly builds and the result is a fantastic reimagining of a song that has, my feelings notwithstanding, become a classic of sorts.

Let’s skip ahead to “Down in Brazil,” from the pens of Beaver Harris (did I hear you say “Who?“) and Roy Burrows. This is another great song that Walton and the guys do a superb job on, beginning with Jordan’s opening notes and Hayes’ Latin-tinged stick play. What’s that you say? What is “Latin-tinged stick play?” I guess you’ll just have to listen to find out. 🙂 As with the other songs, this is very much a collaborative effort and the results are worth the price of admission.

Moving ahead to the title track, Coltrane’s classic “Naima,” we have Walton giving us a brisk but mellow opening, with Jones and Hayes backing magnificently. This one is Walton’s baby all the way, and he runs with the lead all the way to the finish line. From a strictly musical point of view, I kind of wish they had dialed down the crowd’s chatter a bit because it is a bit distracting at times. But from a realistic experience point of view, it is just that sort of distraction, and the ability to block it out and perform at the top of your form, that makes a professional a professional.

The final full song on the album is Thelonious Monk’s “Blue Monk.” This has long been a favorite of jazz fans, and I have to admit I like it too. I have a hard time getting my head around some of Monk’s work, but “Blue Monk” is one of those tunes that pretty much anyone can enjoy without having a degree in advanced music studies from a prestigious university.

That last part is of overriding importance to the future of jazz. If jazz is to survive as a musical genre, and possibly even flourish again one day, it needs a lot more melodic music that can be enjoyed by anyone, and less atonal… stuff.

Otherwise, jazz as we know it will, within twenty years, be relegated to the dustbin of history, a weird experiment that reached its peak of popularity by catering to the masses, but then doomed itself to obscurity by scaring away (or insulting, even) the “little people” who would try to find something to like about it.

Think I’m blowing hot air, making much ado about nothing? I hate to pop your bubble, but our beloved jazz is already in its death throes even as you read these words.

If you haven’t figured it out by now, let me tell you outright that I believe you will find “Naima” by Cedar Walton to be an excellent addition to your personal playlist, for a Saturday or any other night! 🙂

If you would like to learn more about Cedar Walton and his music, here are a few links to get you started:

If you represent a jazz artist with an album you feel would “fit in” here, whether a new release or what I call “pre-existing jazz,” please use the contact me form below. I will provide you with an address you can submit a review copy.

My original content, including photos other than album covers, Copyright © 2015 by Al Evans. All rights reserved.