After a hiatus that has lasted nearly three and a half months, I am at last back with a new review. As you will see, I did badly misjudge the amount of time I was going to need to write this, and for that I apologize. I will endeavor to do better from here on out.

The name Sonny Rollins is synonymous with many things. All of them can be distilled down to two words: Great jazz. Having reached the grand old age of 86, he is still going strong after six decades.

Given that I have no fewer than 21 of his albums in my personal collection, it’s hard to believe but I have only written about one of them before now. That was back in 2012, and the album was his 1978 vinyl release, “Don’t Stop The Carnival,” which was the subject of JFASN #60.

To learn more about Sonny Rollins and his music, here is an interesting article about him from a web site called “Men’s Journal.” The article was written in 2013 and is as extensive as you will find on any jazz site.

You will find another fairly extensive article about him from April of this year on The Telegraph web site.

In the interest of saving time, will refer you to the review of “Don’t Stop The Carnival” for any further biographical information you may desire about Rollins.

In June of 1956, Prestige Records released an album that would become one of the most-talked about, most-beloved jazz albums ever: Rollins’ “Saxophone Colossus.” That album is, and is not, the one I want to tell you about tonight. 😉

The Rollins album I do want to tell you about is “Saxophone Colossus And More,” the 1975 expansion of his seminal 1956 classic. 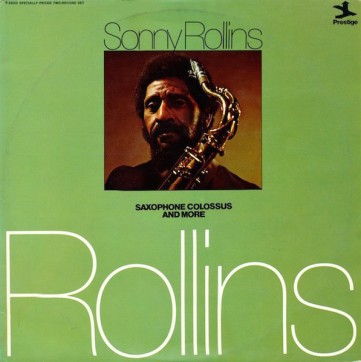 Before I go any further, I should point out that the “Saxophone Colossus and More” that I am going to write about here is the original vinyl two disk release from 1975 containing twelve songs. The first five of those are the tracks that comprised “Saxophone Colossus” in 1956.

In 2010, Rollins released a different “Saxophone Colossus And More” in a two CD set which, depending on where you look online, contains either only eleven songs or over twenty. Since I don’t have a copy of that more recent release, I have no way to compare the two.

Two things should be obvious, but I will state them anyway. The first is that what follows is based on my two disk vinyl version from 1975.

The second is that I do not presume that any of this is going to offer any startling new insight into what has to be one of the most popular, and most written about, jazz albums of all time.

Moving on, the personnel for this album varies, with Rollins and drummer Max Roach being the only two who appear on all tracks.

Got that? Neither do I, but that’s okay. You can still enjoy the wonderful music. 😉

The original “Saxophone Colossus” tunes were performed by:

The album opens with an outstanding version of the Kurt Weill-Bertolt Brecht 1929 classic, “Moritat.” This of course became internationally famous a few years later when it was recorded by Bobby Darin and released as “Mack The Knife” in 1959.

There is no vocal in Rollins’ version, and with all due respect to the late Bobby Darin, the song is all the better for it. Rollins’ sax takes the lead at the first note and keeps it for the first four minutes of the ten minute song. He doe step back and let pianist Tommy Flanagan take over for a while, but it is only a short respite and then Rollins is back at it again, albeit with a bit of back and forth between himself and drummer Max Roach.

“Moritat” is followed by “Blue Seven” and “Strode Rode,” both Rollins originals. “Blue Seven” is the mellower of the three, which together comprise the first side of record one. “Strode Rode” is a pretty good name for the song, as Rollins and bassist Watkins move it right along.

Another Rollins classic follows, “St. Thomas.” This song, which has become Rollins de facto theme song, is right up there with “Moritat” for popularity. “St. Thomas” begins with Max Roach’s drums setting the pace. Roach is soon joined by Rollins and off they go into the now familiar Latin-tinged opening verse.

The final song here from the original “Saxophone Colossus” is “You Don’t Know What Love Is,” written by Gene DePaul and Ron Raye. “You Don’t Know” brings forth images of a late night rendezvous, two people slow dancing, holding each other close, oblivious to their surroundings.

The song is so relaxing that it almost put me to sleep during the several times I just listened to it. I must admit, that may be my Sleep Apnea, reminding me that it is still with me.

Some things never change, even after a several month long hiatus. I am, as usual, running out of time, and we haven’t even gotten to the songs that Rollins added to the mix in 1975.

Rather than jumping ahead to see what I can find to squeeze in before I hit deadline, I am going to call a halt at this point and continue with the rest next week.

When we reconvene, so to speak, I will give you the list of artists who performed on the additional songs.

It is worth noting that the roster includes the ill-fated trumpeter Clifford Brown and pianist Richie Powell, both of whom were killed, along with Powell’s wife, in a car wreck almost exactly three months after recording part of the new material.

[1-14-2017 CORRECTION: Clifford Brown and the Powell’s were killed four DAYS after the recording session with Rollins, not four months. My apologies for the confusion.]

My original content, including photos other than album covers, Copyright © 2017 by Al Evans. All rights reserved.

Support local jazz! Check out their new web site and become a member of the

2 thoughts on “Jazz For A Saturday Night 167: Sonny Rollins”