Gerry Mulligan was, in the words of critic Scot Yanow, “The most famous and probably greatest jazz baritonist of all time…” His career spanned five decades, during which he worked with virtually every jazz musician of any import alive.

He was born on April 6, 1927 in New York City, and died January 20, 1996 in Darien, Connecticut. Mulligan’s father was an engineer whose career kept the family constantly on the move. When he was seven years old, Mulligan began to study the piano. He shortly switched to the clarinet, however, and eventually moved on to the saxophone.

At the age of 16, Mulligan was turned down for a job playing with the WCAU-CBS studio orchestra, but the orchestra director, Johnny Warrington, was impressed enough with Mulligan that he began to buy the boy’s arrangements.

Mulligan’s first big break came when he was invited by Charlie Parker to sit in on a jam session. By age 19 he was studying with Gil Evans, and a few years later he had the opportunity to sit in on a few songs when Miles Davis recorded the legendary album, “Birth Of The Cool.” The compositions and arrangements he contributed to that project were considered invaluable. It was Davis who bestowed upon Mulligan the nickname “Jeru.”

At one time or another, Mulligan played with a “who’s who” of jazz. Giants like Chet Baker, Dave Brubeck, Bob Brookmeyer, Paul Desmond, Zoot Sims, Al Cohn, Stan Getz, “Art Farmer, Thelonious Monk, Ben Webster, Nat Adderley, Lee Konitz, and many, many others.

Mulligan recorded dozens of albums, and the one I’m going to discuss tonight is the classic recording, “Pleyel Concert.” I have two versions of this concert: A 1980 Inner City Records re-release on vinyl; and the version which BMG France released on two separate CDs in 1996.

I had the CD’s for a while before I realized they were the same concert that is on the LP, because for some reason Inner City Records changed the name of the LP to simply “Gerry Mulligan.”

(Before I go any further, I want to thank pianist Beverly Ritz for giving me her copy of one of the CDs, which, naturally, is why I went online in search of the companion volume.)

Cover photos and liner notes on the LP and the CD’s are different. Don Waterhouse translated Claude Carriere’s French liner notes for the CDs, while Down Beat magazine’s Jerry DeMuth penned his own original thoughts for the LP commentary.

There are other differences between the LP and CD versions. The LP contains a total of 10 tracks, 5 per side. Each of the CD’s has 14 tracks, in actual set order.

All tracks are in mono. Considering the importance of this set of recordings, it would be nice if someone would finally get around to digitally re-mastering this concert in stereo. Hint, hint. 😉

The personnel are always important, and that is even more true of this set of recordings, laid down barely two years after Mulligan’s first experiment with a pianoless quartet.

In June of 1954 none had yet seen their 30th birthday and they were at the top of their form, musically if not physically. Mulligan was in a great deal of pain as a result of a bad landing when their airplane first touched down in Europe. Despite having to play in agony, when interviewed by DeMuth for the LP re-release, Mulligan described their European concerts as “an electrifying experience for us.”

Due to space and time limitations, I’m not going to discuss all 28 tracks on both disks, or even most of them. I am going to talk about just enough of them to, I hope, tantalize you so you’ll go out and find your own copies of these classic recordings. 🙂

“Volume 1” opens with “Bernie’s Tune.” Besides being a great song, it is also notable for its absence from the vinyl LP version of the concert. It was a regular part of Mulligan’s repertoire and appears on no less than nine of his albums over the years.

Track two is Mulligan introducing the musicians, and then we go into “Walking Shoes”, the first of eight Mulligan compositions we are treated to. The interplay between Mulligan and Brookmeyer really makes this one, and the audience responds vigorously.

We next sample Mulligan’s compositional skills on track five, which is a two song medley consisting of “Motel” followed by a very short (less than a minute) piece called “Utter Chaos,” which I am happy to report does not live up to its name. If anything, it reminds one of a stripper’s vamp. Ha. J

“Soft Shoe” is a wonderful rendition, not surprising I suppose when one considers that Mulligan wrote it, too. So is “Bark For Barksdale”, another piece which thrilled the Parisian audience lo those many years ago to the point where they actually applauded Isola’s drum solo instead of holding off until the end of the song. 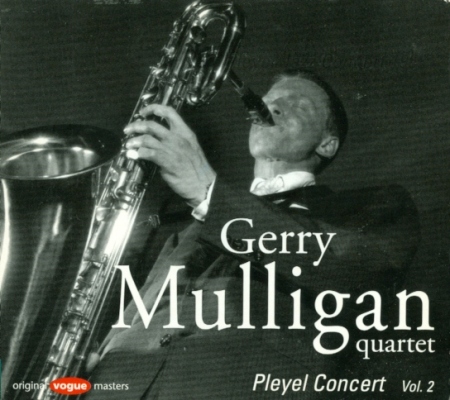 “Volume 2” opens with a Rodgers & Hart standard and audience favorite, “The Lady Is A Tramp.” From there they move on to the somewhat more sedate “Laura.” which also elicits an enthusiastic audience response. The Mulligan original, “Five Brothers,” appears on both disks. My favorite of the two? Well, as River Song is wont to tell the Doctor, “Ah ah ah… Spoilers!” 😉

Although the tracks are in set order, three separate concerts are excerpted on these two disks. They blend nicely, however, and the effect is that of sitting in on three exciting sets that took place over the course of one evening.

Other high points to listen for: “Limelight,” “Come Out, Come Out, Wherever You Are,” and “Line For Lyons.”

In the original version of this article, I had a link to “Soft Shoe” on YouTube. Unfortunately, YouTube cancelled the account of the person who uploaded that video, so it is no longer available.

However, I was able to find a link to one song from “Pleyel Concert,” although this version was recorded a year or two later. I do hope you enjoy it.

I’m sure you’ll find that Gerry Mulligan’s “Pleyel Concert,” Volumes 1 and 2, will make a great addition to your personal playlist, for a Saturday or any other night!

You can learn more about Gerry Mulligan and his music by visiting his official web site. Additionally, there is a nice bio of him on the PBS web site, and esteemed critic Scot Yanow has a nice piece about Mulligan on the allmusic.com web site.

Information about the “Gerry And Franca Mulligan Foundation,” established to help young musicians to attend music school and to donate music instruments to inner city schools, may be found here.

My original content, including photos other than album covers, Copyright © 2011 & 2013 by Al Evans. All rights reserved.

3 thoughts on “Jazz For A Saturday Night #4: Gerry Mulligan”